MAILROOM AT NAVBHARAT PRESS-INDIA BY STALLION 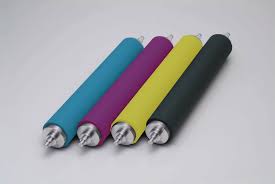 OGL 22  is an advanced and fully features computer controlled On Line Glue Applicator, developed for Newspaper and Commercial applications.


The machine is fitted in line with the Web offset machine  and allows gluing of running webs at many points along the direction of travel of the web to produce various innovative folding.


In a simple touch screen operation the operator can control the flow and amount of Glue to be applied.


The sophisticated dispensing heads are mounted on easy retro fit enabled brackets for ease of locations on the web path and is connected with  high quality Festo make Glue Pipes. The system features a suck back system to remove the extra glue thereby providing a seamless and neat gluing on the web.


OGL 22 is capable of gluing up to 48 page quarter fold booklets saving huge amount of time and  manpower in bindery for magazine printers.

FEATURES
Handy System for multiple webs.
User friendly Touch Screen to control operation.
Various patterns as dot, dash, continuous are readily available.
Fast and reliable valve for web of speed up to 15mtr/sec.
Different nozzles to suit the gum thickness on the web.
Suck back system, to avoid gum from dripping.
Flow of gum starts at set speed of the machine.
Flow of gum is auto controlled with increase and decrease of web speed & stops at web break/stop or below set machine speed.
Easy Cleaning of the system by water.
Mounting position can be moved horizontally or vertically to get desired results.
Compact system with touch panel controlled.
Local service and support.

On every Post Press project we have two challenging choices ahead of us:

2)  How do I layout these machines in order to optimize

ƒ   the available space and the plant logistic

ƒ   the product flow through the system (including intelligent back-up

This comparison wants to be a help for question 1) with a focus on small and medium presses with limited need of automation where the Post Press mostly consists of a conveying system and either a compensating stacker (optionally with a trimming line) or a semi-automatic log stacker.

Unfortunately we still see plants inefficiently running books, directories or magazine work through a compensating stacker or retail work through a log stacker from where they pile down loose bundles.

Here the two main question which help to make the right choice:

Here under a fast and simple guide to what could be the best machine for your operation. It is not a “black or white” choice since space; budget, future plans etc. will also influence the choice:

Offset Printing: The Next Greatest Thing in Blanket Cleaning

Offset Printing: The Next Greatest Thing in Blanket Cleaning: I don't like to promote products, especially ones that are unproven.  But there was a new product released at Drupa by Grafinkontrol for ...
Posted by yogi11000 at 7:43 PM 12 comments:


Dot gain is a phenomenon that causes printed material to look darker than intended. This happens because the diameter of halftone dots increases during the prepress and printing process. The optical and physical properties of the media and machines used both in preparing the job for print and the printing process itself cause this behavior. Below is an example of what happens when a nice flat tint (left) gets printed on newspaper stock: ignore the fact that the paper is grayish – look at how the dots get fuzzy and a lot bigger.

Simulation of dot gain in a newspaper


Prepress and press operators can try to minimize certain types of dot gain but cannot avoid that dot gain occurs. As such it is also the responsibility of the designer to be aware of dot gain and to anticipate its effect. You typically find dot gain controls in applications like Adobe Photoshop.

Dot gain is expressed as a numerical value which equals the difference between the wanted value and the resulting value. For instance: if a page has a 50% flat tint as a background but after measuring the printed result, this flat tint is now 65%, the dot gain equals 15%.

•Please note that the convention for specifying dot gain is slightly weird: it is expressed as a percentage at a certain tint. The percentage however is not a real percentage but an absolute value – 20% dot gain at 50% does not mean the end result are halftone dots that are 60% but that the resulting halftone dots measure 70%!
•If no target percentage is specified, it is assumed that dot gain is specified for a 50% tint.
Dot gain is not identical for all the colors used in color printing. There are slight differences in dot gain between cyan, magenta, yellow and black.

Dot gain is sometimes refered to as TVI (tone value increase). TVI is a more generic description of the difference in tone value between a requested value and the final output. It is also a more suitable name for processes in which some devices may not actually deliver a dot in the final output.


There are different types of dot gain in the prepress and printing process.

The optical system in computer to plate systems or imagesetters is not always perfectly linear. In order to make sure that the media are exposed sufficiently, the laser beam is a bit wider than needed so that the lines that are exposed slightly overlap each other. Depending on the process (positive/negative), this may cause either a slight dot gain or a dot loss.

Media such as plates or film also can be non-linear: some are but polymer plates for instance can have a dot gain of 5 percent of so.

On an offset printing press ink is transferred from the printing plate to the blanket and from the blanket to the paper. Each time the dots get squashed a little bit, increasing the physical diameter of the printed dot. The ink that is used, the fountain solution, the blanket, the pressure (over/underpacking) and the speed at which the press runs all influence this type of dot gain.

When ink is absorbed in paper, this occurs both vertically (into the paper) and sideways, which again increases the dot diameter. This effect is more pronounced 0n newsprint than it is on coated paper.

When light hits the printed surface, it becomes slightly diffused around the dots. The human eye (as well as measuring devices) perceive this as a darkening. Dots appear to be larger than they really are.

Applications like Adobe Photoshop will automatically compensate for dot gain when images are converted from RGB to CMYK. This is done based on the selected preferences, as shown in the above screen capture of Photoshop CS3′s color settings. Designers need to be aware of this and make sure that their software is configured properly for the printing process that will be used to print their jobs. They also need to be aware that vector based applications like Adobe Illustrator don’t compensate for dot gain. If you draw infographics for a newspaper, you need to make sure that flat tints don’t get too dark in print.

Prepress operators are expected to make sure that plates delivered to the press are linear, with a typical tolerance of around 2%. Workflows and RIPs come with calibration tools to achieve this. If a system has 5% dot gain, instructing the RIP to image a 50% tint as a 45% tint assures that the end result is once again 50%. This process is called linearisation.

Given the fact that so many people supply files that are optimised for sheetfed offset printing with a dot gain between 12 and 20%, operators may tweak other devices such as digital presses to mimic the dot gain behavior of offset presses.

In general higher screen rulings exhibit more dot gain. Vendors of workflow and computer to plate systems sometimes anticipate this: for the very fine dots that are used in screening algorithms such as stochastic screening, they create screen cells that aren’t linear – the 50% dots may for instance be 38% dots. By including a pre-compensation in the screen cells, printers achieve better results with the out-of-the-box set-up and only have to focus on fine-tuning the system to their particular needs. 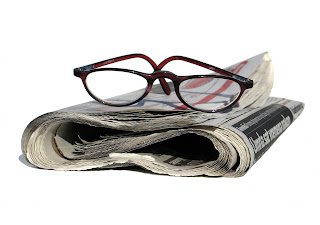 Welcome to my blog...we attempt to share with you news from the web offset printing industry, recent developments and press enhancements to enable you print better colour, print more efficiently and increase productivity of your preses. We welcome your suggestions and look forward to your valued queries and feedback on this blog...Happy reading...!